Like every other fan of Alexander Hamilton the man and Hamilton: An American Musical, I was eager to watch the PBS documentary about the making of the musical, titled Hamilton’s America, which aired on October 21, 2016. I knew that this documentary would be a mix of Alexander Hamilton history and behind-the-scenes footage of the development, production, and staging of the musical. And while I enjoyed most of the documentary, I was sorely disappointed in some of the historical inaccuracies.

Now, we all know that there are historical inaccuracies in the musical. Most of these are perfectly fine as Lin-Manuel Miranda used his poetic license to tell the story. Lafayette being in America and meeting Hamilton before the war even started is one such example. Everyone knows it didn’t happen that way, but it made sense from the musical’s perspective to present it that way. Other inaccuracies were mistakes to which Miranda has admitted, like when Angelica Schuyler said, “My father has no sons,” when he in fact had three sons. Others are errors that have come down through history and which the musical repeats, like the oft-repeated tale of Martha Washington’s tomcat named Hamilton.

As a piece of fiction, Hamilton: An American Musical is immensely enjoyable. Moreover, it gets most of the history right and certainly captures the spirit of Hamilton’s life and of the period. So even when this nit-picky historian points out inaccuracies in the musical, he does not intend to diminish the great work created by Lin-Manuel Miranda and the other producers and performers. It is only done to educate those who would like to learn more about Alexander Hamilton.

However, when PBS produces a documentary, I expect more accuracy and certainly don’t expect them to mislead the viewer. And yet, that is exactly what happens in at least one instance. Talking about Alexander Hamilton’s life on St. Croix in the Caribbean West Indies, the documentary of course discusses Hamilton’s account of the great hurricane of 1772, which was published in St. Croix’s The Royal Danish American Gazette. On screen, they present this image of the newspaper. 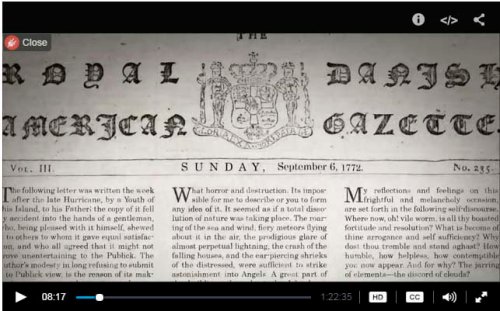 According to this image, Hamilton’s hurricane account was published in The Royal Danish American Gazette on Sunday, September 6, 1772. At the top of the newspaper’s first column appeared a preface introducing Hamilton’s account. Hamilton’s writing then appears on the top of columns two and three.

Unfortunately, none of this is true. This image is a complete fake. It was doctored for the purpose of presenting in this documentary.

First of all, you probably noticed that Hamilton’s hurricane account appears on the second page of the newspaper, not the first. Not only is that less dramatic than having it on the first page, it makes it more difficult to present quickly on the TV screen. And in order to make Hamilton’s hurricane account fit on the first three columns of the first page, they didn’t just copy and paste the original into their desired position, but they actually retyped it. Of course, they styled it to look like it was original to 1772 because they wouldn’t want the viewer to think it was fake.

Second, you might notice that while Hamilton’s newspaper account is dated September 6, 1772, it was not published until October 3, 1772. And yet, in PBS’s version, the newspaper with Hamilton’s account was published on September 6.

Third, there is one part of PBS’s image that is original: the beautiful masthead of The Royal Danish American Gazette. But even here, PBS erred. PBS copied the masthead with volume and issue numbers from Vol. 3, Issue No. 235. You’ll see in the real newspaper featuring Hamilton’s essay that that the issue of October 3 was No. 234. Issue No. 235 was published October 7, 1772.

Fourth, since PBS used the masthead from October 7 and no issue of the newspaper was published on September 6, PBS had no choice but to retype the date under masthead. What’s most amazing is that The Royal Danish American Gazette was published only on Saturdays and Wednesdays. But September 6, 1772, was a Sunday. So, in very large letters, PBS typed “SUNDAY.” Even to the casual eye, that “SUNDAY” stands out as inauthentic.

To summarize, PBS changed the layout of the newspaper, retyped the text of Hamilton’s hurricane account, retyped and changed the date of publication, and had the wrong issue number. The only original things about it were the words written by Hamilton and the masthead, which was taken from a different issue.

Perhaps it’s just the historian in me caring too much about historical accuracy, but I expected more from a PBS documentary.