U.S. home prices fell in March for the eighth straight month, confirming the beleaguered housing market has entered a double-dip recession, according to a closely followed index released Tuesday

U.S. consumer confidence declines in May:

Consumer confidence fell in May as Americans grew slightly more pessimistic about future job prospects and business conditions, according to a closely followed survey.

A Chicago-area manufacturing gauge dropped by the largest amount in nearly two-and-half years in May, in a further sign that the rise in oil prices and the Japanese earthquake have affected activity.

The popping of the Chinese bubble?

With all the talk of inflation, China is experiencing a deflation problem. Marketwatch reports:

China is urging major supermarkets to boost vegetable sales and encouraging farmers to bypass middlemen and market produce directly, in a bid to curb a steep slide in prices that is hurting farmers’ incomes, the Ministry of Commerce said in a statement.

The ministry has also set up a “work group” to maintain prices at a “reasonable” level.

Its statement Wednesday underscores the difficulties the government faces in controlling volatile prices. The impact of an official push last year to raise vegetable output appears to be unraveling now, amid overproduction and clogged distribution lines.

Vegetable prices have fallen 21% in a month and 5.9% from a week ago, the ministry said.

The sharpest declines were seen in green pepper, which fell 20.9% from a week ago, and cabbage, chili pepper and lettuce, which fell 12%, 8.9% and 8.1% respectively.

In contrast, grain, pork, beef, metals and rubber all continued to post small increases of between 0.2% and 1.7% from a week ago.

Last year, the Ministry of Agriculture pushed farmers to raise vegetable acreage by 7% and production by 7.5%, following almost three years of little to no growth in the sector.

The directive was part of wider efforts, including price caps on cooking oil and flour, to curb a surge in food prices.

Worldwide commodity inflation has been driven, in part, by demand from China. Are these price corrections the first sign that the Chinese bubble has popped and that inflation will turn to deflation as Chinese demand evaporates?

Private property is a most sacred right of mankind

Adam Smith writes in The Wealth of Nations:

To prohibit a great people, however, from making all that they can of every part of their own produce, or from employing their stock and industry in the way that they judge most advantageous to themselves, is a manifest violation of the most sacred rights of mankind.

This quote reminds me of what John Adams wrote in 1787 in his A Defence of the Constitutions of Government of the United States of America:

The moment the idea is admitted into society that property is not as sacred as the laws of God, and that there is not a force of law and public justice to protect it, anarchy and tyranny commence. If “Thou shalt not covet” and “Thou shalt not steal” were not commandments of Heaven, they must be made inviolable precepts in every society before it can be civilized or made free.

From The Wealth of Nations:

High taxes, sometimes by diminishing the consumption of the taxed commodities, and sometimes by encouraging smuggling, frequently afford a smaller revenue to government than what might be drawn from more moderate taxes. [page 954]

In case you didn’t know, the Chicago Fed reports:

A research paper published by the Chicago Fed has concluded that extra jobless benefits — unemployed workers can now get up to 99 weeks of benefits — may be contributing up to 0.8 percentage points to the current unemployment rate, which was 9% in January. The Chicago Fed paper said the extra benefits may still be worthwhile, given that in their absence workers may be forced to take jobs that represent poor matches for their skill levels. Also on Thursday, Minneapolis Fed President Narayana Kocherlakota said the natural rate of unemployment — basically, the smallest rate of unemployment that won’t lift inflation — ranges between 5.9% and 8.9%.

For those who are not economically literate, let me summarize: If the government pays people not to work, fewer people will work.

I don’t know why the Fed had to do a study to determine that. Maybe they were just trying to figure out not if it had an effect but how large the effect is. Or maybe it was just a study devised to keep a few economics employed during the recession.

What I really don’t understand is this line:

The Chicago Fed paper said the extra benefits may still be worthwhile, given that in their absence workers may be forced to take jobs that represent poor matches for their skill levels.

So the Chicago Fed thinks it is better to have people sitting around doing nothing rather than do a job below their current skill level? These people really do live in ivory towers.

Rising energy prices are a concern not that they will lead to higher inflation but that they will subtract from household income and thus weaken the economy, said Eric Rosengren, the president of the Boston Federal Reserve Bank on Friday. Rosengren said the lasting effect on energy prices on overall inflation “has been surprisingly small in recent years.” The surge in oil prices in mid-2008 were followed by significant declines in core inflation, he noted. Rosengren said the Fed’s innovative monetary policy has not been inflationary. “It has been more than two years since the Fed’s balance sheet expanded dramatically. Sine that time core inflation has fallen to something like 50 year lows, he said. Rosengren is not a voting FOMC member this year. He spoke to an event hosted by the Connecticut Mortgage Bankers Association.

Maybe Mr. Rosengren can explain to me how rising oil prices leads to falling household income? Spending money on oil is spending, obviously, not a change in income. I assume he meant that the rising prices eats up a larger portion of household income; in other words, non-discretionary spending rises. But there’s a term for this phenomenon of rising prices: INFLATION.

Trying to give the Fed President the benefit of the doubt, I thought maybe the article was misconstruing what he said. So I searched Google and found his actual words:

My primary concern about rising energy prices is not so much that they will lead to higher inflation, but that they will subtract from household income and thus weaken the economy.

Apparently, we live in a new economic reality. In the new economics, rising prices weaken the economy (by somehow hurting “household income” but I assume he meant income available for discretionary spending) but does not lead to inflation. Get that? I admit, this new economics is confusing so here it is in simple English: rising prices cause deflation or, at the least, disinflation.

We really are living in George Orwell’s 1984. “WAR IS PEACE, FREEDOM IS SLAVERY, and IGNORANCE IS STRENGTH.” And now, INFLATION IS DEFLATION.

Legal Insurrection: Key Numbers In Unemployment Report Not So Good

Le·gal In·sur·rec·tion analyzes today’s employment report and the results are not good despite the headline decline in unemployment from 9.8% to 9.4%. (Reposted with permission. Original post here.)

Needless to say, administration supporters will be touting that the unemployment rate released by the Bureau of Labor Statistics this morning dropped from 9.8% to 9.4%.  Politically, this is good news for Obama, at least in the short run.

Dig just a bit deeper, and you will see that 0.2% of that drop (or half the total drop) was from a decrease in the “participation rate” from 64.5 to 64.3 of the population.  So half of the good news reflects that people have dropped out of the work force and have given up looking for work.

To put this in context, I ran a chart from the BLS website historical statistics database, showing the participation rate over the past 20 years, which shows that we are at a 20-year low:

The other disheartening statistic is reflected in the chart combining the unemployment, marginal and discouraged workers (in short, everyone who is not working but currently or at one time wanted to work, or who is employed part time because full time work was unavailable).  Combine all those and the total is 16.6% up from 16.3% November not seasonally adjusted (seasonally adjusted it is 16.7% down from 17%).  This is the highest number since 1994 (first year data available): 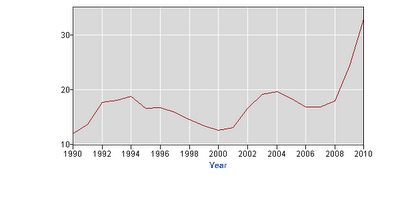 While the drop in the unemployment rate from 9.8% to 9.4% is good political news, it’s hard to see any real improvement below the surface.

This gives further evidence that the American economy is still in decline. All that government stimulus accomplished nothing except for putting us further in debt.

Singapore’s economy expanded at a record 14.7 percent in 2010, Prime Minister Lee Hsien Loong said Friday, in a sharp recovery from last year’s recession for the city-state.

It was the best performance ever for Singapore’s trade-led economy, surpassing the previous record 13.8 percent growth achieved in 1970.

The annual 14.7 percent surge announced by Lee is also at the top end of the government’s growth forecast of 13-15 percent.

How does Singapore do it? According to Heritage’s Freedom Index, Singapore is the second most economically free nation in the world behind Hong Kong and well ahead of the United States.

Small government, low taxes, and economic freedom has turned Singapore into an economic powerhouse. Singapore’s economy is now 12 times larger than it was 30 years ago. Compared to the United States, Singapore per capita income has more than doubled in the last 30 years.

We should learn from foreign countries. We can avoid their mistakes and copy their successes. While we cannot copy everything Singapore has done, nor would we want to, we can copy the success they’ve had with small government, low taxes, and economic freedom.

Hungary faces the risk of further downgrades of its credit rating after Fitch Thursday cut Hungary’s sovereign debt by one notch to BBB-.

The risk of a further downgrade of Hungary’s credit rating could increase in case of further intensification of the euro area crisis, said Citigroup economist Piotr Kalisz. Citi doesn’t expect a downgrade to non-investment grade in the near term, but markets could start pricing in such a risk especially if the government fails to present a credible fiscal adjustment plan.

Although the downgrade came as no surprise, the forint reacted by weakening to the euro. Fitch followed Moody’s Investors Service Inc. and Standard & Poor’s Corp. in putting Hungary’s rating to one grade above junk.

Fitch Ratings on Thursday downgraded Portugal’s credit rating to A+ from AA-. The agency also downgraded Portugal’s short-term currency rating to F1 from F1+. The Associated Press said that Fitch cited a slow reduction in Portugal’s deficit and a tougher financing environment as reasons for the downgrade. The euro bought $1.3098, an improvement from earlier in the U.S. session, and slightly up from late Wednesday.

Anybody think the sovereign debt crisis is over?

It is already well known that the United States is poised to lose its status as the world’s largest industrial producer for the first time 110 years. In 2011, China will become #1.

But China is also poised to claim another, possibly more important crown. China will become the world’s lender and investor of last resort, a title the United States has held since the end of World War II. Mail Online reports:

China has said it is willing to bail out debt-ridden countries in the euro zone using its $2.7trillion overseas investment fund.

In a fresh humiliation for Europe, Foreign Ministry spokesman Jiang Yu said it was one of the most important areas for China’s foreign exchange investments.

The country has already approached struggling European countries with financial aid, including offering to buy Greece’s debt in October and promising to buy $4billion of Portuguese government debt.

As China passes the United States in another key measure, let’s look at the bright side: We can let China lose money bailing out insolvent countries and not waste our own.