First they banned sugar, then salt, then fat, then…

With apologies to Martin Niemöller.

Then they came for my meat and processed grains,
and there was nothing tasty left for me to eat.

Photos of Occupy Wall Street at Zuccotti Park. Looks like a third-world tent city to me.

I was down at Zuccotti Park today where the Occupy Wall Street “protesters” have literally set up camp. I was shocked by what I saw. This does not appear to be some noble protest. Instead, it looked like a third-world tent city–one without privacy, running water, and sanitation–was dropped into the heart of our financial capital. 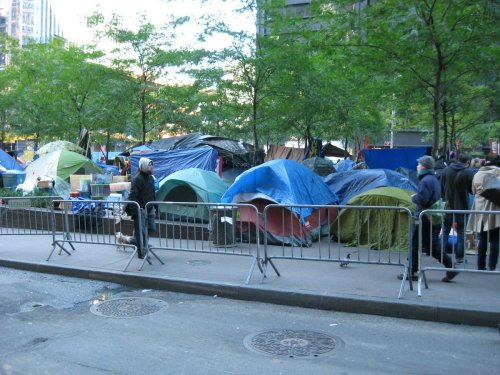 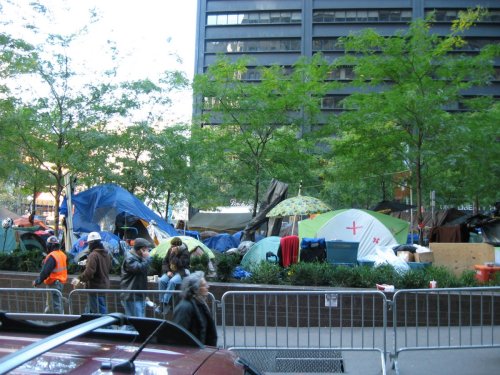 Also shocking were the restrictions around Wall Street. Vehicle traffic has been blocked on Wall Street and Broad Street in front of the stock exchange ever since 2001, but the barricades have recently been pushed far back for pedestrians as well, given them little space to walk. 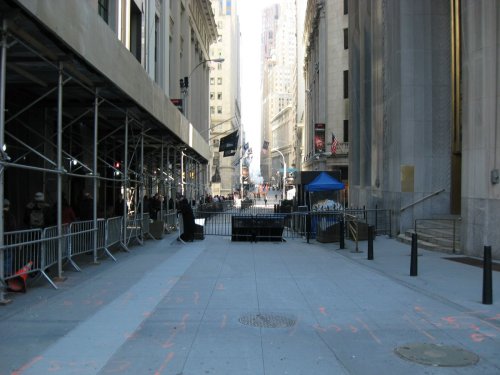 Even the famous bull at Bowling Green at the base of Broadway has been cordoned off.

Even though Mayor Bloomberg has been sympathetic to the Occupy Wall Street protesters, he and the police are clearly worried about potential violence against these New York landmarks.

The most amazing thing is that you really cannot tell what these people are protesting for or against when you walk by. As you can see by the photos above, there were no banners or placards attacking Wall Street and no list of demands. Instead, to all appearances, it was just a lot of homeless people (whether by circumstance or by choice) who have set up camp in downtown Manhattan. While I know from the “news” that these are noble protesters seeking to right the wrongs of the world, but it certainly looked like a lot of homeless people in tents.

From the perspective of the average American, I cannot understand why anybody would care what these people believe, think, or want. It is a lot of unemployed people (again, whether by circumstance or by choice) who have completely failed in delivering their message, whatever that may be. Like their makeshift camp, the whole movement appears to be a disorganized mess that, in my humble opinion, should be cleaned up both from a standpoint of unsanitary conditions and poor political reasoning.

Bloomberg versus Jefferson: the role of government.

To halt the worldwide epidemic of non-communicable diseases, governments at all levels must make healthy solutions the default social option. That is ultimately government’s highest duty.

Thomas Jefferson in the Declaration of Independence:

We hold these truths to be self-evident, that all men are created equal, that they are endowed by their Creator with certain unalienable Rights, that among these are Life, Liberty and the pursuit of Happiness. — That to secure these rights, Governments are instituted among Men…

So is it government’s highest duty to make healthy solutions the default social option? Or are governments instituted among Men to secure our unalienable Rights, that among these are Life, Liberty and the pursuit of Happiness?

I think I’ll let you decide who which speaker is correct.

A smoking ban does not make a nanny state. Or not entirely.

New York City is about to ban smoking in public parks and beaches. Many libertarian and conservative types are up in arms over this expansion of the nanny state. However, I support this ban. But before you attack me, let me explain what I don’t support and why I support this.

As my readers know, I am no supporter of the nanny state. I oppose the government telling private businesses what they can and cannot do in this area. If a private business wants to allow smoking in their establishment, why not? It is their private property and people can choose not to frequent that establishment. For years, smart business have provided smoking and non-smoking sections. As long as the smoke does not enter the non-smoking section, this worked very well and everybody was happy.

On the other hand, public areas, such as parks, beaches, and streets, are for everybody to use. We obviously have the right to occupy space as we walk through the area or sit/stand in place. But we do not have the right to interfere with other people’s enjoyment of the area. We should not litter, we should not make too much noise that would disturb others, and we should not pollute the air others are trying to breathe. There is no reason that the smoking minority should rule over the non-smoking majority. If smoking is allowed on the public streets, this essentially forces non-smokers to breath in the deadly pollutant or stay home. In modern society, there is no way to live without going into the public thoroughfare and allowing smoking there is dangerous. Besides, what is the point of banning smoking in a bar if I have to walk through smoke-filled streets to get there. If you don’t believe me, walk through the streets of Manhattan. In front on every skyscraper is a group of workers taking a smoke break, to the detriment of the public. Those smokers should stay indoors. The building owners should provide them with a room or area to smoke in. But in NYC, that is illegal. They are forced to smoke out on the street.

The other suggestion is that New York City should have made the vast majority of the parks non-smoking and provided small areas for smokers. This is something that I would support. However, all smoke should be kept away from the public, so smoking should still be banned on sidewalks and streets. And parks too small to have both smoking and non-smoking sections should be totally non-smoking.

Just to clarify, I thinking smoking is pointless, dirty, and unhealthy. But I think people should have the freedom to do as they wish. And on another note, many would point out the costs to society of the health care costs that come with smoking. If that were the issue here, New York City would ban smoking entirely, including in individual homes. But the issue here is the rights of individuals while in a public area.

Mayor Bloomberg an accessory to a federal felony

For those who haven’t heard:

New York Mayor Michael R. Bloomberg wanted to illustrate that buying a gun like the one used in the recent Arizona shootings is as easy as buying “a hamburger and fries at a McDonald’s.” So he sent out undercover investigators to help him prove it.

In a performance straight out of Hollywood, an investigator is seen handling a semiautomatic pistol that he is thinking about buying from a dealer at a Jan. 23 Crossroads of the West gun show in Phoenix. Sounding sinister, he says, “I like the concealability, it’s the best part,” and admits he couldn’t pass the background check required to buy a gun from a licensed dealer — but not from a private dealer like the one at the gun show. He then hands over a wad of cash and walks away with the pistol.

“That sale was blatantly illegal,” said Bloomberg, explaining that private sellers are not supposed to forgo checks if they have a reason to believe buyers are felons, mentally ill or couldn’t pass federal scrutiny. “But it happens all the time.”

My good friend Alan Korwin, who literally wrote the book on gun laws, explains in a just published article:

On an unrelated note, I’ve just been informed that Mayor Bloomberg of New York City has sent a team of people to Arizona to attempt to illegally purchase firearms at a gun show. He has apparently just held a news conference to promote this fact. If true, this makes Mr. Bloomberg an accessory to a federal felony, and the people he sent would have committed several federal felonies in attempting or making the purchases. No word of indictments of the Mayor have yet surfaced. We’ll be watching these developments closely. Elected officials are not free to break laws in an effort to promote any agendas they may have. Such activity is reprehensible and deserves punishment.

Thank you Alan for defending our rights and shedding light on the hypocrisies of our “leaders.”