UPDATE: Europe is paying for its past excesses: European interest payments as % of GDP.

With news out today of a weak German bond auction and troubles with the Dexia bailout, I thought it time to update my table of European interest payments as % of GDP. But first, the news:

So now, let’s see an updated table of where Europe stands in its ability to pay the interest on its debts.

As you can see on the above table, only Portugal had a significant decrease in interest payments going forward. In contrast, Greece, Ireland, Belgium, Spain, and France all say significant increases. Whereas previously, only four countries had interest going forward exceeding 3 percent of GDP, six nations now face that situation.

Clearly, as anybody watching the stock market decline here knows, the European debt crisis is getting worse and the European leaders have yet to find a solution. Unfortunately, with the budget mess in Washington and debt-to-GDP ratio of about 100%, higher than most of those “risky” European nations, the United States will soon be facing the same problem.

Europe is paying for its past excesses: European interest payments as % of GDP.

With interest rates rising in Europe and heavy debt-to-GDP ratios, I decided to look at how much interest each European country must pay going forward as a percentage of its economic output. I threw in the United States for fun. (Table sorted by interest payment %age of GDP.)

Now, these debt figures account only for federal government spending. Many countries, most notably the United States, also has state, provincial, and local governments with their own debts. Additionally, many of the debt-to-GDP estimates are from 2010. Thus, most of the above countries have debt-to-GDP ratios and interest expenses even worse than calculated above.

Clearly, we can see why Greece is in trouble. If it were to refinance its debt at market rates (it has been refinancing through Euro-zone subsidized loans), its interest payments would exceed its GDP by a half.

Italy is also paying for its problems. So far, Italy has received no help from any bailout fund and, as of now, will have to refinance its debt at market rates. As such, it will cost Italy 8.5% of its GDP to do so. If it had a more reasonable debt level and interest rates, say those of France, Italy would have an additional 7.4% of GDP to spend or save.

Most surprising is how everybody is ignoring Portugal. Portugal has already received bailout funds, but that won’t last forever. If Portugal were to return to normal by accessing the market, interest payments would eat up 15.3% of its GDP. That’s a lot to pay for past mistakes.

Belgium is another sleeper. It’s problems are just as bad as Spain’s, yet nobody is talking about them. Furthermore, Belgium has not been able to form a ruling coalition since elections were last held on June 13, 2010, breaking all records. Furthermore, the New Flemish Alliance party is Belgium’s largest political party with 17% of the vote. This party favors the “peaceful and gradual secession of Flanders from Belgium.” Lots of problems there, but nobody seems to be talking about it.

So far, Europe has paid for the mistakes of Greece, Portugal, and Ireland. However, Italy’s debt is 2.7 times the combined debt of those three nations that are already receiving bailout funds. That makes Italy both too big to fail and too big to bail out.

Europe is facing problems on multiple fronts: Greece, Italy, Portugal, Ireland, Belgium, and Spain, to name a few. So far, Europe has successfully staved off depression by bailing out the smaller, weaker countries. But as the problem spreads to more countries, and bigger ones at that, Europe is running out of room and options.

There is something rotten in the state of Greece. Also in Ireland, Portugal, Spain, and Italy.

Europe is patting itself on the back as they supposedly work out a fix for Greece. Basically, Greece will get billions more Euros in exchange for spending cuts. As a result, Greek interest rates fell slightly, though they are still very very high. 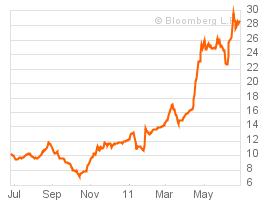 But wait a second there Europe. Don’t drink your champagne just yet. What about the rest of Europe? 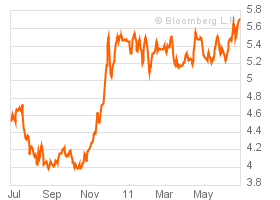 Very puzzling. Why are those interest rates rising to record highs if you solved the problem? I’m starting to think you don’t know what you’re doing.

A quick look at the charts shows the sovereign debt crisis has hit record levels along with European interest rates:

With 10-year interest rates up at 14.9, 10.5, and 9.5 percent (and two-year rates even higher in many cases), it is hard to see how these countries can afford to pay these rates. If the United States were paying a 10% interest rate with debt about 90 percent of GDP, 9 percent of GDP and about a third of federal spending would go just to paying interest on the debt. In Greece, where debt is about 130 percent of GDP, the government is spending about 19.4 percent of GDP on interest. This is clearly unsustainable, which is why everybody expects these countries to “restructure” their debts, a euphemism for defaulting and paying back less than they owe. This expectation is a self-fulfilling prophecy because it pushes rates even higher.

With the situation in the United States only marginally better, how long before rates rise here and the U.S. defaults? Best to cut spending now, when we have a choice, than later when interest rates rise and the government has to divert spending to interest payments.

Interest rates are hitting their highest levels since the euro zone was created. Here are the five most “at-risk” countries, in order of chances of default. 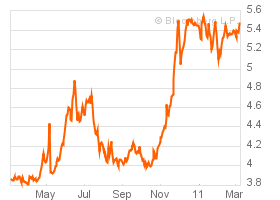 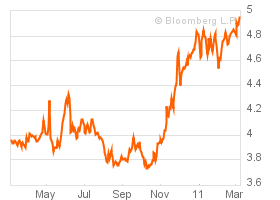 Moody’s Investors Service cut Greece’s sovereign-debt rating Monday by three notches to B1, infuriating the Greek government and temporarily denting the euro amid renewed worries about the ability of Greece and other debt-loaded euro-zone governments to avoid default.

The ratings agency, which also assigned a negative outlook to Greece’s ratings, highlighted the government’s difficulties with revenue collection and noted a risk that Athens might not meet the criteria for continued support from the International Monetary Fund and the European Union after 2013.

That could result in a voluntary restructuring of existing debt, the ratings agency said.

[…] The spread on Greek five-year credit default swaps widened 27 basis points to 1,010 basis points, according to data provider Markit. A basis point is 1/100th of a percentage point.

That means it would cost $1.01 million annually to insure $10 million of Greek debt against default for five years, up from $983,000 on Friday.

And the sovereign debt crisis continues, just as I’ve been saying it would…

Disregarding the discussion about the political effects of the protests in the Middle East, how about the financial implications?

The cost of protecting sovereign debt against non-payment in northern Africa and the Middle East continued to rise Tuesday as investors reacted to ongoing turmoil in Libya. Morocco was hardest hit, with the spread on five-year credit default swaps widening to 200 basis points from around 184 on Monday, according to data provider Markit. That means it would cost $200,000 annually to insure $10 million of Moroccan debt against default for five years, up from $184,000. The Egyptian CDS spread widened 19 basis points to 375, Markit said, while Bahrain’s spread widened 10 basis points to 317. The Israel CDS spread widened to 163 from 154.

Losses by banks in this region will only hurt the important countries’ fiscal situation.

The turmoil in the Middle East just adds a new twist to the sovereign debt crisis. Until nations reduce their debt levels, which none are doing right now, this story is far from over and will be around for years to come.