Alexander Hamilton: The Formative Years is now available for sale.

The wait is over. After four years of hard work, Alexander Hamilton: The Formative Years is now available for sale.

The print edition of Alexander Hamilton: The Formative Years can be purchased at:

The ebook of Alexander Hamilton: The Formative Years can be purchased and downloaded from:

“We now live in the America that Alexander Hamilton launched. Just as Hamilton’s star continues to rise, Michael E. Newton has moved forward with a painstakingly researched and carefully documented biography of the most remarkable of our Founding Fathers. Hamilton’s life story is complex, richly layered, and deserving of the meticulous attention to detail that Michael E. Newton’s work will provide for generations of Americans.”

~ Leonard A. Zax is President of the Hamilton Partnership for Paterson. Mr. Zax is is a lawyer and a city planner with more than thirty years of experience in community development and historic preservation projects throughout the United States. A former partner in the law firm of Latham & Watkins, he has taught a course on Historic Preservation and Urban Revitalization at Harvard University. He is a graduate of Eastside High School, the University of Chicago, the city planning program at Harvard Design School, and Harvard Law School. William Paterson University awarded him an honorary Doctor of Humane Letters in 2010.

Alexander Hamilton: The Formative Years is now available for pre-order.

Even though Alexander Hamilton was among the most important Founding Fathers, less is known about his early life than that of any other major Founder. Relatively few records have been found regarding Hamilton’s birth, childhood, and origins in the West Indies. Alexander Hamilton “rarely . . . dwelt upon his personal history” and never recorded his life’s story. Most of Hamilton’s correspondence prior to 1777 was lost during the American Revolution. This has resulted in many gaps in Alexander Hamilton’s biography, which has given rise to much conjecture regarding the details of his life. Relying on new research and extensive analysis of the existing literature, Michael E. Newton presents a more comprehensive and accurate account of Alexander Hamilton’s formative years.

Despite being orphaned as a young boy and having his birth be “the subject of the most humiliating criticism,” Alexander Hamilton used his intelligence, determination, and charisma to overcome his questionable origins and desperate situation. As a mere child, Hamilton went to work for a West Indian mercantile company. Within a few short years, Hamilton was managing the firm’s St. Croix operations. Gaining the attention of the island’s leading men, Hamilton was sent to mainland North America for an education, where he immediately fell in with the country’s leading patriots. After using his pen to defend the civil liberties of the Americans against British infringements, Hamilton took up arms in the defense of those rights. Earning distinction in the campaign of 1776–77 at the head of an artillery company, Hamilton attracted the attention of General George Washington, who made him his aide-de-camp. Alexander Hamilton was soon writing some of Washington’s most important correspondence, advising the commander-in-chief on crucial military and political matters, carrying out urgent missions, conferring with French allies, negotiating with the British, and helping Washington manage his spy network. As Washington later attested, Hamilton had become his “principal and most confidential aid.” After serving the commander-in-chief for four years, Hamilton was given a field command and led the assault on Redoubt Ten at Yorktown, the critical engagement in the decisive battle of the War for Independence. By the age of just twenty-five, Alexander Hamilton had proven himself to be one of the most intelligent, brave, hard-working, and patriotic Americans.

Alexander Hamilton: The Formative Years tells the dramatic story of how this poor immigrant emerged from obscurity and transformed himself into the most remarkable Founding Father. In riveting detail, Michael E. Newton delivers a fresh and fascinating account of Alexander Hamilton’s origins, youth, and indispensable services during the American Revolution.

Publication scheduled for June 2015. More details to come over the next few weeks.

Show will be available online as well (live and on demand) at:
http://www.c-spanvideo.org/program/314099-1
http://www.c-span.org/History/Events/The-Presidency-Alexander-Hamilton-amp-George-Washington39s-Relationship/10737441073/

Call me a ‘conservative liberal’ please.

Up until now, when people have asked me what is my political philosophy, I’ve said that I’m a libertarian republican, both lowercase. In other words, I believe in a republican form of government (representative government with the different classes and powers balancing each other) and that this government should have powers limited by a constitution. While this still describes me, I will now be calling myself a conservative liberal.

Eighteenth-century Britain was both conservative and liberal. Britain was conservative with its constitutional monarchy and traditional system of peerage and honours. Britain was also the most liberal nation in the world, with the people’s rights guaranteed by the Magna Carta. This conservative-liberal synthesis was brought over to the colonies, where it flourished for more than a century. Edmund Burke explains that the American colonists were “not only devoted to liberty, but to liberty according to English ideas, and on English principles.”

Unlike most revolutions, the goal of the American Revolution was not to change society. In fact, the Founders and most Americans fought to maintain society as it was. The Declaration of Independence opens with:

When, in the course of human events, it becomes necessary for one people to dissolve the political bands which have connected them with another…

With the Declaration of Independence, America was dissolving the political bands connecting it to Britain. America was not dissolving the bands that held its society together. Not once does the Declaration of Independence mention society or changing the social system. One Founding Father even lamented that, amid the chaos of the revolution, “For the want of civil government the bands of society are totally disunited, and the people…have become perfectly savage.” This destruction of the bands of society is not what the Founding Fathers wanted and they worked hard to prevent it.

If Britain were to overthrow its monarchical government, that would be a radical change in its society. However, for Americans, who had no inherited classes or titles, dissolving the political bands between Britain and America would leave society virtually untouched. Although the signers of the Declaration of Independence could not be considered conservative from a British viewpoint, they certainly were from an American perspective.

These leading men were also liberal in the classical sense of “a commitment to the liberty of individual citizens,” “the proper role of just government as the protection of the liberties of individual citizens,” and “a commitment to a system of free markets.” As Frederick Douglass said about the signers of the Declaration of Independence: “They loved their country better than their own private interests… In their admiration of liberty, they lost sight of all other interests… They believed in order; but not in the order of tyranny.”

Therein lay the delicate balance. The Founding Fathers wished to protect the liberties of the American colonists and stop British tyranny while still maintaining law and order.

I have the same goals as our Founding Fathers. I want to promote liberty by removing the tyranny of an abusive and unresponsive government. That makes me a classical liberal. (Modern liberals, or neo-liberals as I call them, believe in something entirely different.)

However, unlike many libertarians, and this is why I am abandoning that moniker, I do not want overly rapid change. While I would love to see a dramatically smaller government, I do not believe we can go from a government spending 40% of GDP to one spending just 10% of GDP overnight. It will take many years. Drastic changes in the nature of our government done overnight would create so much chaos that it would give demagogues the opportunity to seize power. This makes me a conservative in the classical sense of the word. 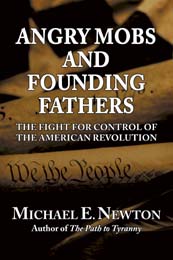 If you would like a preview, you can read a portion of the book and search through it over at Google Books. (Amazon’s Look Inside feature should be enabled shortly).

Angry mobs launched the American Revolution when they protested against British acts of tyranny. These rebels threatened, harassed, and chased away British officials and Loyalists. The Founding Fathers agreed with the goals of these Patriots, but not with their methods. Fearing anarchy, the Founders channeled the passions of the mobs toward independence.

Working together, the angry mobs and Founding Fathers defeated the mighty British army and won independence, but the new nation that emerged was anarchic and chaotic, much like the angry mobs themselves. Meeting behind closed doors, the Founding Fathers conspired to depose the Confederation government, wrote a new constitution, and created the world’s most successful republic.

‘Angry Mobs and Founding Fathers’ tells the little-known story of how these two groups fought for control of the American Revolution. 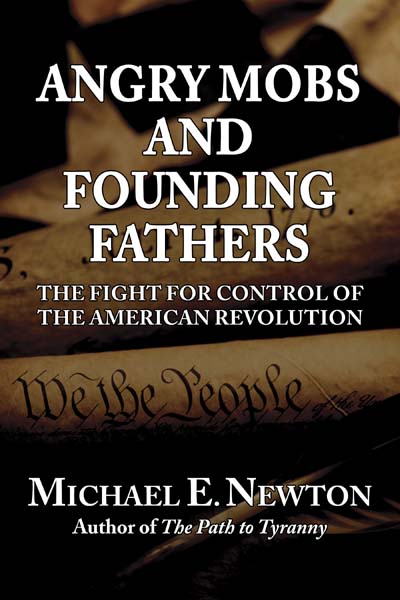 My Totally Biased Required Reading List for Lovers of Liberty

The Federalist Papers: The best description of the principles of liberty and how to apply them.

The Road to Serfdom: Explanation of how big government leads to tyranny.

The Path to Tyranny: Show how big government has historically led to tyranny.

Atlas Shrugged: Shows what the consequences of government intervention on the American economy.

Please suggest other “Required” books in the comments.