Marketwatch reports Salaries and wages are rising, but not by much. Even that subdued headline is upbeat when you read some of the details:

Want some more bad news? Average wages today are lower than a decade ago when adjusted for inflation, according to an analysis earlier this year by the Economic Policy Institute.

Additionally, the official unemployment rate was just 4.0% back in 2000. Today, it stands at 9.5%. So not only are working Americans earning less, many more are unemployed and earning nothing.

The American dream is dying. But why? I again return to this chart, first posted here. 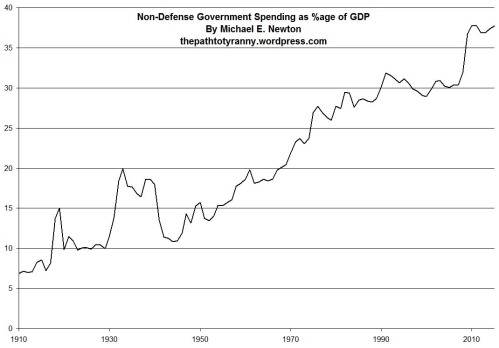 While non-defense government spending at 28.95% may look appealing now that the figure is about nine percentage point higher, non-defense government spending had never exceeded that level prior to 1982. While many talk about the small government days of Bill Clinton and the Republican Revolution of 1994, remember that FDR, LBJ, and Jimmy Carter all spent less excluding defense (which is wildly volatile depending largely on external affairs) than the U.S.’s recent best.

Our experiment with government intervention in society is failing. Government control over a third of the economy has produced high unemployment and stagnant wages. For decades, the United States enjoyed small government and prospered as a results. It is no coincidence that our recent weakness is the result of an overly large and burdensome government.

In The Path to Tyranny, I wrote:

Why work if the government will provide free food, subsidized housing, free health care, and a welfare check?

It turns out that fewer people are working and more are relying on government assistance. The USA Today reports Record number in government anti-poverty programs. Here are some of the numbers:

All told, these government welfare programs cost $525 billion. Currently, there are 139 million employed people in the United States. Thus, each worker is taxed about $3,800 to support the unemployed. The average employee earns about $40,000 per year. So he gives up 9.5% of his wages to be received by the employed. The unemployment rate is 9.5%, an exact match for this income redistribution scheme.

Of course, the average employed person lives much better than the average unemployed person. But this is not always true at the margin. A  below average wage earner may find he or she is better off not working and choose to receive government welfare instead. This is especially true if he or she has children and would have to pay for childcare while working. The added childcare expense along with taxes and transportation expense may make it financial wiser to stay unemployed and receive government assistance.

Not only are these programs costing hard-working Americans a large portion of their earnings, it is encouraging many to stay at home when they could work and would like to work.

The Fall of Civilization is spreading

In a follow-up to The fall of civilization spreads to Oakland, USA Today reports:

Budget cuts are forcing police around the country to stop responding to fraud, burglary and theft calls as officers focus limited resources on violent crime.

Cutbacks in such places as Oakland, Tulsa and Norton, Mass. have forced police to tell residents to file their own reports — online or in writing — for break-ins and other lesser crimes.

In Tulsa, which lost 110 officers to layoffs and retirements, the 739-officer department isn’t sending cops to the scene of larceny, fraud and car theft.

Tulsa police spokesman Jason Willingham says some residents have said they won’t bother to report those crimes any more. “They think nothing is going to be done, so why mess with it,” he said.

In the Boston suburb of Norton, police told residents there may be delays or no response at all to some calls, including vandalism. The department posted the new policy on its website.

“We wanted to let people know about this,” Norton Police Chief Brian Clark said. “We didn’t want people to be surprised.”

As I wrote about Oakland, “The government’s primary job is to protect the people’s rights to life, liberty, and property.” But apparently, the government is abandoning its job of defending our property. I am of course reminded of what John Adams wrote regarding private property in his A Defence of the Constitutions of Government of the United States of America:

“The moment the idea is admitted into society that property is not as sacred as the laws of God, and that there is not a force of law and public justice to protect it, anarchy and tyranny commence. If “Thou shalt not covet” and “Thou shalt not steal” were not commandments of Heaven, they must be made inviolable precepts in every society before it can be civilized or made free.”

In cities such as Oakland, Tulsa, and Norton, “there is not a force of law and public justice to protect it.” So when will anarchy and tyranny commence? Or has it already?

Classic quotes against the income tax

Plato: “When there is an income tax, the just man will pay more and the unjust less on the same amount of income.”

Adam Smith in the section “Taxes upon the Wages of Labour” of The Wealth of Nations:  “Absurd and destructive as such taxes are, however, they take place in many countries.”

Albert Einstein: “The hardest thing in the world to understand is the income tax.”

Will Rogers: “Income tax has made more liars out of the American people than golf.”

Brazil is booming and brimming with business opportunities—like the “US in the 1950s”—billionaire businessman Sam Zell told CNBC Wednesday. He said if Brazil continues on the same course, he predicts that the “fiscally conservative” nation will soon be one of the top two countries in terms of growth.

The real estate tycoon said Brazil has 8 percent debt, compared to 70 percent (of GDP) in the US. The country has a AAA rating from several major credit-rating institutions.

The government now confiscates more of your money through taxes to pay for this largess. In the 1950s, government at all levels took in 26.6 percent of GDP. Now, government takes 30.4 percent of our money, a 14.3 percent increase.

In the 1950s, government welfare spending accounted for 1.57 percent of GDP. Today, it accounts for 5.21 percent, a 231% increase. Wikipedia explains how LBJ’s Great Society caused this massive increase:

After the Great Society legislation of the 1960s, for the first time a person who was not elderly or disabled could receive a living from the American government. This could include general welfare payments, health care through Medicaid, food stamps, special payments for pregnant women and young mothers, and federal and state housing benefits. In 1968, 4.1% of families were headed by a woman on welfare; by 1980, this increased to 10%.

Lastly, the United States government has actively pursued a policy of limited oil production. Back in 1950, the US produced 5.9 million barrels a day of oil and had net imports of 545 thousand barrels, 8.4 percent of the total consumptions. In 2009, US production had risen only 21.8 percent over the previous 59 years to 7.2 million barrels a day. But consumption had risen 162 percent to 16.9 million barrels. As a result, imports increased 1,680 percent to 9.7 million barrels a day. At a current price around $70 a barrel, that adds up to $248 billion a year sent overseas, about 1.6 percent of GDP. Thus, over the last 60 years, trillions of dollars have left this country, to be spent primarily by unfree societies overseas. See oil data here.

Capitalists argue that government spending on welfare, food stamps, housing subsidies, etc. crowds out charities. If government is providing the poor with everything they need, then what is there for charities to do?

Now, the socialists have turned that argument on its head:

SPIEGEL: Forty super wealthy Americans have just announced that they would donate half of their assets, at the very latest after their deaths. As a person who often likes to say that rich people should be asked to contribute more to society, what were your first thoughts?

Krämer: I find the US initiative highly problematic. You can write donations off in your taxes to a large degree in the USA. So the rich make a choice: Would I rather donate or pay taxes? The donors are taking the place of the state. That’s unacceptable.

You got that? Giving money to charity is unacceptable because it is taking the place of the state. But wait, there’s more:

SPIEGEL: But doesn’t the money that is donated serve the common good?

Krämer: It is all just a bad transfer of power from the state to billionaires. So it’s not the state that determines what is good for the people, but rather the rich want to decide. That’s a development that I find really bad. What legitimacy do these people have to decide where massive sums of money will flow?

Understand? Only the government is able to determine what is good for the people and people have no legitimacy to give their own hard-earned money to charity as they see fit.

Next thing you know, acts of charity will be a crime against society.

A Very Popular Democrat Argues for Lower Taxes. Will the left listen?

John F. Kennedy in his Economic Report of the President from January 1963:

Tax reduction thus sets off a process that can bring gains for everyone, gains won by marshalling resources that would otherwise stand idle—workers without jobs and farm and factory capacity without markets. Yet many taxpayers seemed prepared to deny the nation the fruits of tax reduction because they question the financial soundness of reducing taxes when the federal budget is already in deficit. Let me make clear why, in today’s economy, fiscal prudence and responsibility call for tax reduction even if it temporarily enlarged the federal deficit—why reducing taxes is the best way open to us to increase revenues.

In short, this tax program will increase our wealth far more than it increases our public debt. The actual burden of that debt–as measured in relation to our total output–will decline. To continue to increase our debt as a result of inadequate earnings is a sign of weakness. But to borrow prudently in order to invest in a tax revision that will greatly increase our earning power can be a source of strength.

My Totally Biased Required Reading List for Lovers of Liberty

The Federalist Papers: The best description of the principles of liberty and how to apply them.

The Road to Serfdom: Explanation of how big government leads to tyranny.

The Path to Tyranny: Show how big government has historically led to tyranny.

Atlas Shrugged: Shows what the consequences of government intervention on the American economy.

Please suggest other “Required” books in the comments.